SERGEI SVIATCHENKO: CLOSE UP AND PRIVATE

The show is dedicated to the project’s 10th anniversary.

This event was covered by an incredible number of reviews and interviews. Back then, 10 years ago, he grabbed his son Erik as model, used a white wall as rear background, some natural light and a small Leica camera, and took the first images of the Close Up and Private project. Now he is celebrating the project’s 10th anniversary with an exhibition at the newly restored exhibition area within an old fire station in Vyborg town.

Sergei Sviatchenko, now 66, was more than once listed among the most stylish men in Denmark and in Japan: by the Euroman magazine in Denmark and by Heil Mary Magazine and Free & Easy in Japan; also, the artist is widely known by his large abstract paintings and conceptual collage works. Close Up and Private project has enjoyed broad international recognition offering its viewers a radical approach to the modern fashion photography represented by different season collec-tions, and Sergey Nielsen’s painting (Sviatchenko’s pseudonym in the project), the timeless style of a “modern classicist”.

The project’s recognizable identity and numerous publications in the international media in Japan, USA, France, Holland, Spain, Germany and many other countries acknowledge his “unique impact on the international fashion scene of his revolutionary approach to men’sfashion photog-raphy”. By creating photo compositions, he used some details of men’s wearand combined them in the same way as he had used complex elements in his collages, – his usual artistic practice, – and it greatly expanded his public, now including individuals of different ages who share appreciation for details, for quality, heritage, and something that Sviatchenko calls “style’s visual language”.

“I call myself a visual artist in the sense that everything that is perceived by an eye (i.e.visually) attracts my attention. The choice of media does not matter, because the principleis always the same. I start with a monologue, – as I do have something to say, – and sometimes I end up devel-oping broad and grateful sincere audience, in resonance with my paintings. Or, the audience can be more limited, – as it is in the case of my collages. Or, it can be diverse and unexpected, – as it is in my Close Up and Private project.

The project is demonstrated with the support of Photo Kyiv 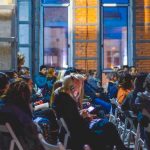 Lecture by Daniel Miller: 15 Things You Can Do to Get Represented by a GalleryNews, Без рубрики