Faces of War – a necessary show as poignant testimony

The brutal invasion of Ukraine on February 24 did suddenly change the face of the world. Unbelievable images of an inhuman attack start to invade social networks, provoking simultaneously incomprehension, shock, and terror.

If we have never been so well informed in the present day, in terms of images and in real time, we are paradoxically confronted with the question of the authenticity of images and fake news. Fuelled by slyly effective Kremlin’s propaganda, it seems today all the more necessary to show the reality of a war whose scale and atrocity are reminiscent of the dark hours of the Second World War.

For victims of the tragedy are ultimately drowned in the flood of unbearable images spread on social networks and media, this exhibition is in contrast conceived as a timeless collection of portraits, focusing on the background and experiences of each individual. Poignant testimony elevating these victims to daily heroes, the present exhibition aims also to be a tribute to the invaluable work of the photographers on site.

Socially committed and famous photojournalist Alexander Chekmenev (1969, Luhansk) has always been interested in capturing the difficult and painful lives of those left behind or working in the shadows – the homeless, the mentally ill, the street people, the miners – all victims of a post-Soviet failed system.

On assignment for The New York Times Magazine to report on the Ukrainians who remained in Kyiv, Chekmenev has been confronted every day with the same difficulties as the population – how to get around the city whose bridges are closed, where to sleep safely. The discovery of a teenage girl taking refuge with her cat and friend in the underground of the Kyiv metro was for Chekmenev both a shock (she reminded him of his own daughter, who has fled to Slovakia) and the starting point for the series Citizens of Kyiv. Since then, and despite the curfew, he has made priceless contacts with some of these singular refugees, listening patiently and kindly to their stories, their questions but also their strong determination.

In a similar humanist approach, independent photojournalist Oksana Parafeniuk (1989, Boryspil, Kyiv region) explores through documentary photography the manifestations of human resilience and dignity in people facing difficulties – such as migration and displacement, people with disabilities.

If her interest in memory – and thus testimony – has always been present in her artwork, this interest has now become a necessity: « The places I knew have changed forever.(…) Now, more than ever, I understand the importance of documenting my country, of preserving the memory of Ukrainian cities and Ukrainians with every passing day.»

Her series Fleeing the War with Hope, on assignment for The Washington Post, tells the story of the difficult journey of Ukrainian children with cancer who flee their homeland to the Unicorn Clinic in central Poland, and from there to pediatric centers around the world, where they could continue proper treatments and therefore have a chance to live.

Tymofii, 10 years old, Yevhniia, 9 years old, are both children with brain tumor that Parafeniuk has the chance to follow on the long and arduous evacuation journey. No cries, no tears, but an immense fatigue due to their unstable condition as well as hours of travel, endless hours of waiting and uncertainty.

Between exhaustion and resilience, Parafeniuk’s testimony demonstrates the tremendous courage and strength of these Ukrainian children, whose bright eyes were remarkably full of hope – the hope for a recovery and a better future. 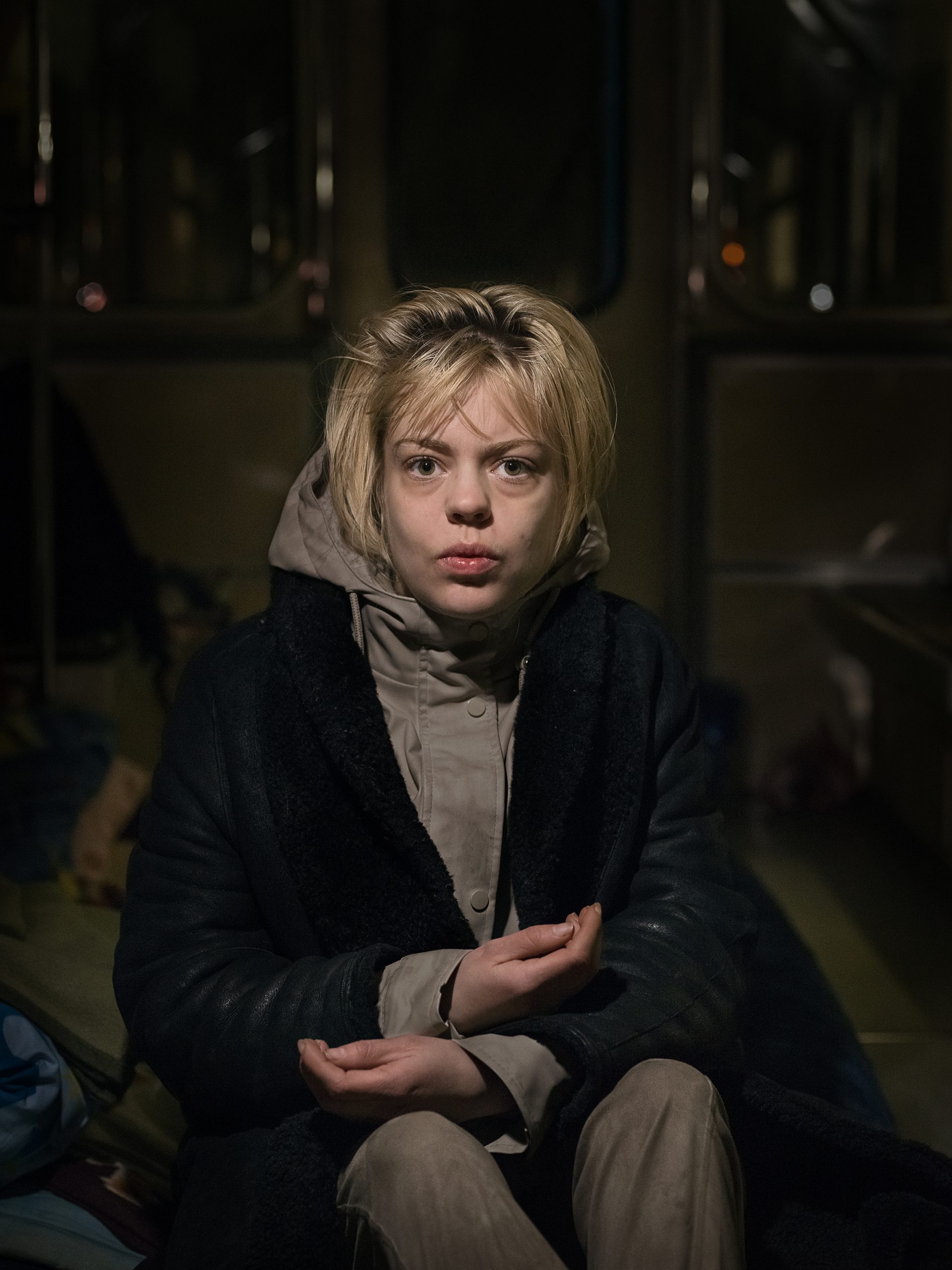 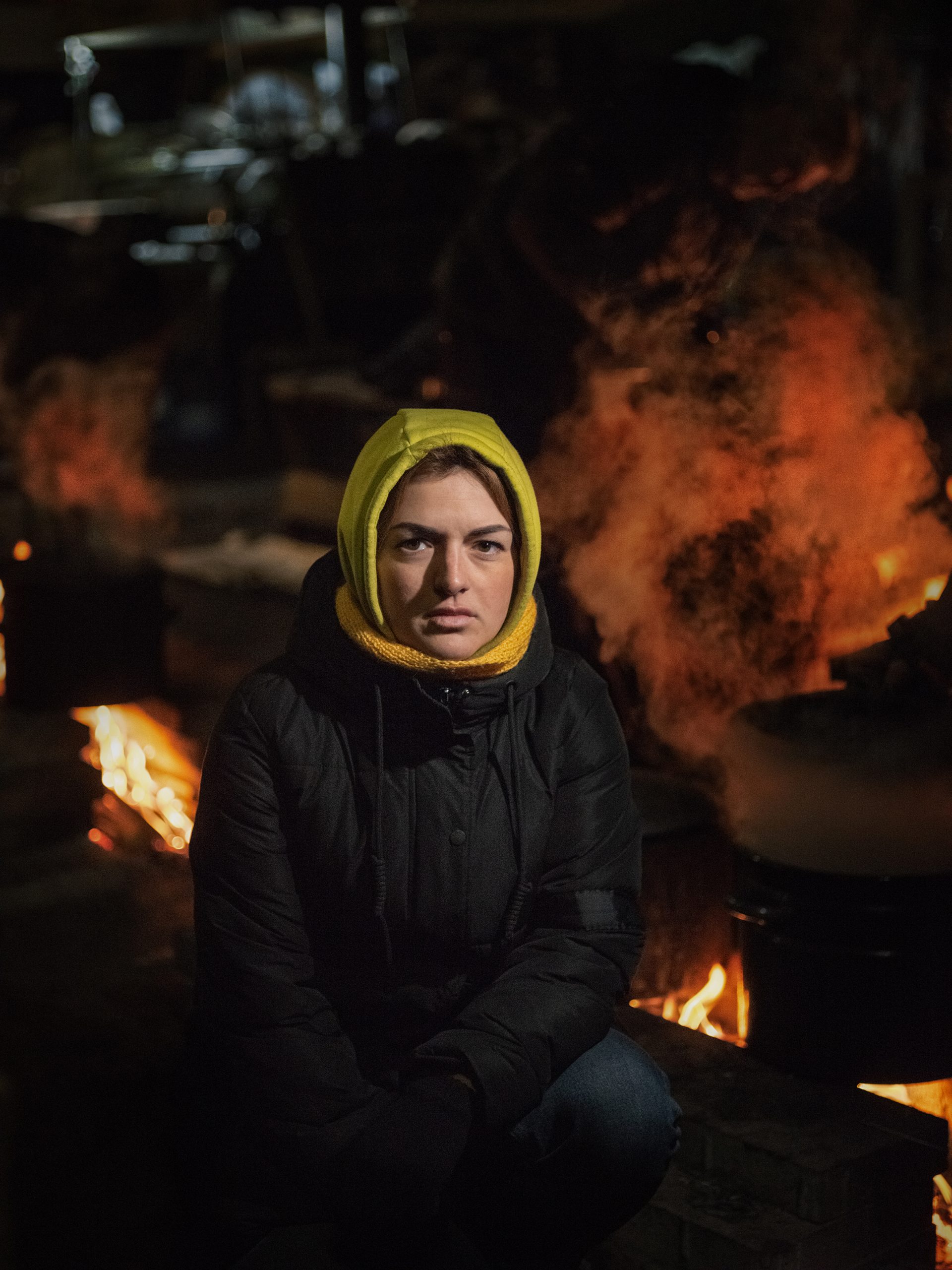 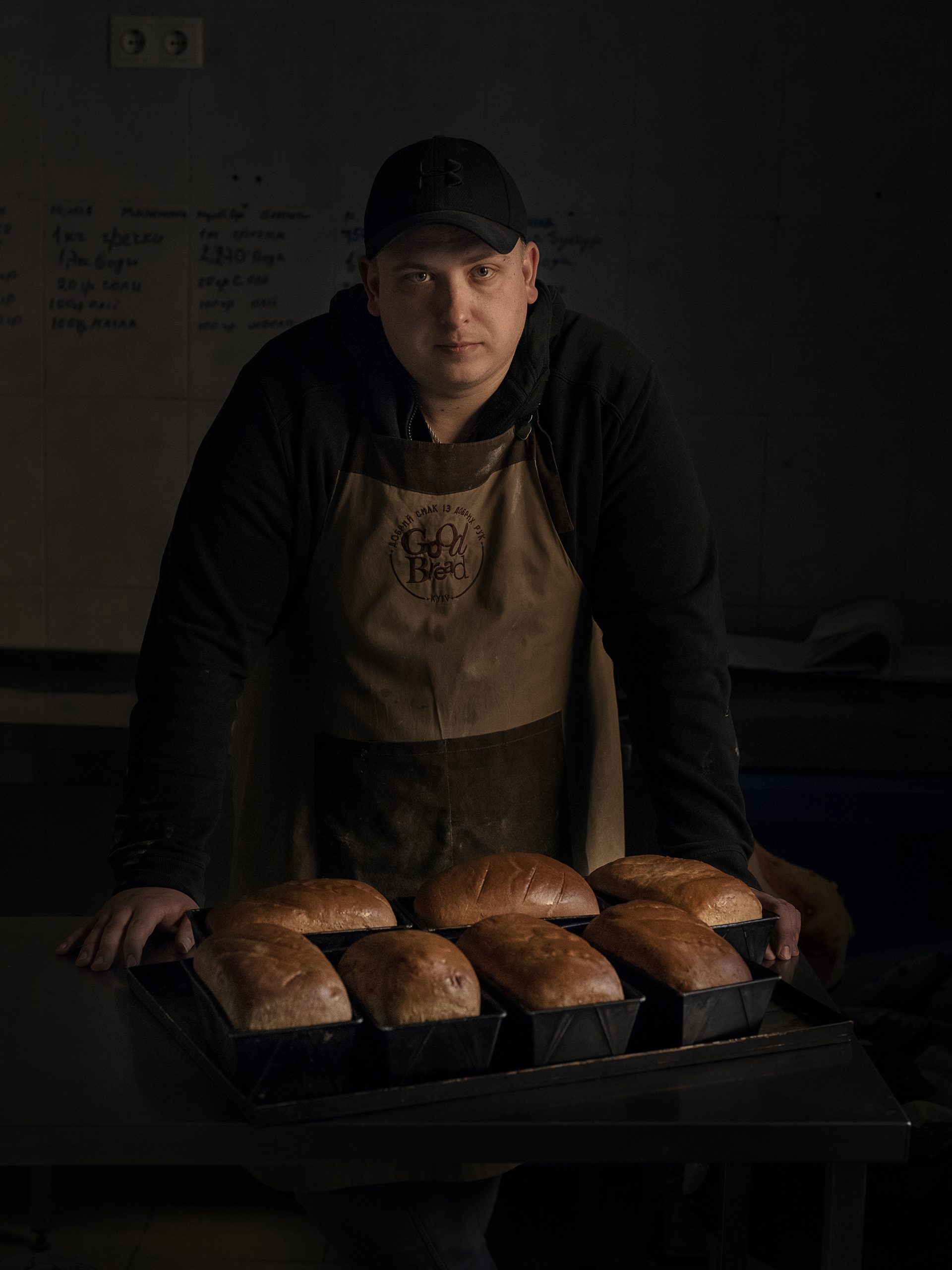 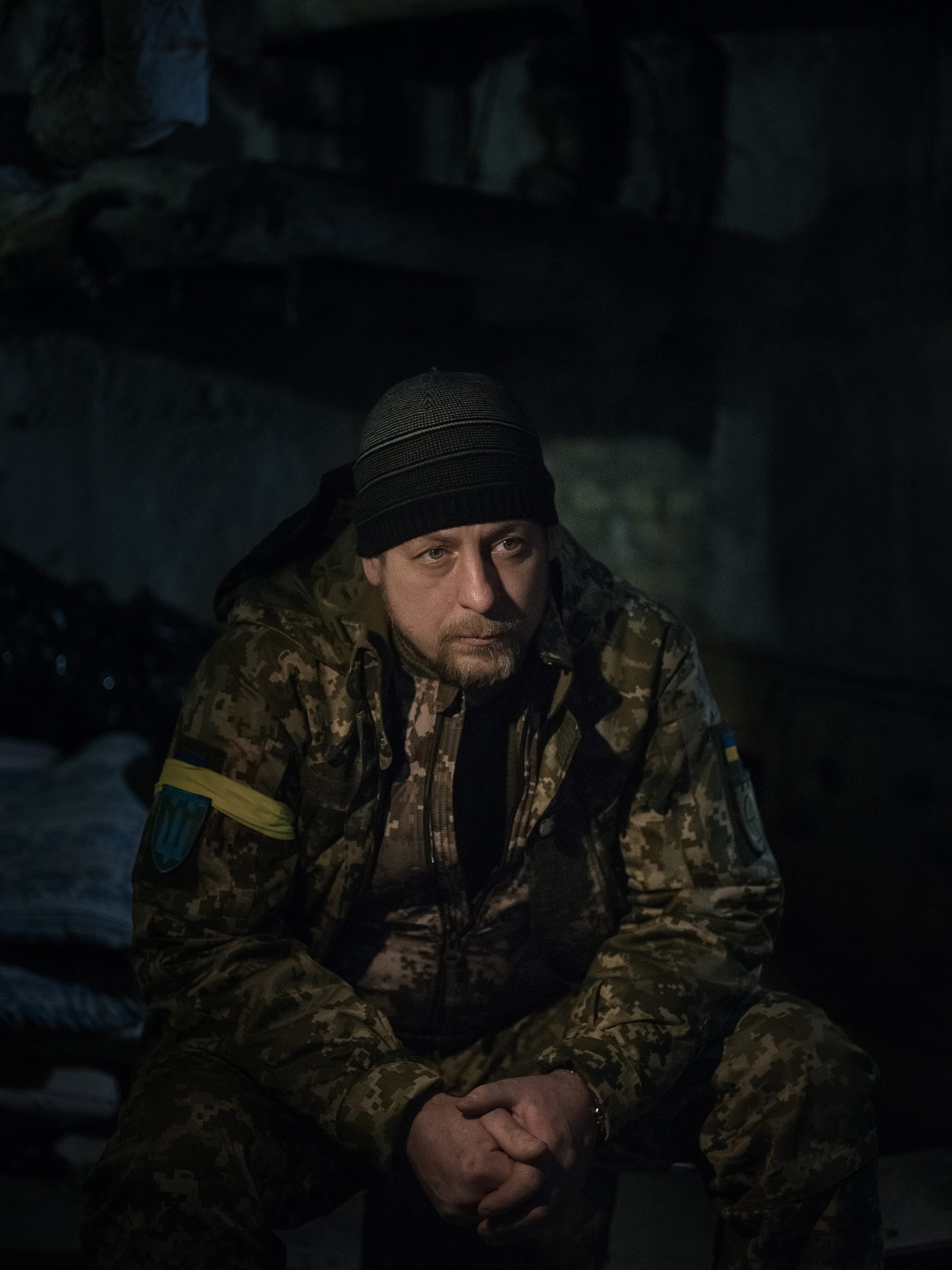 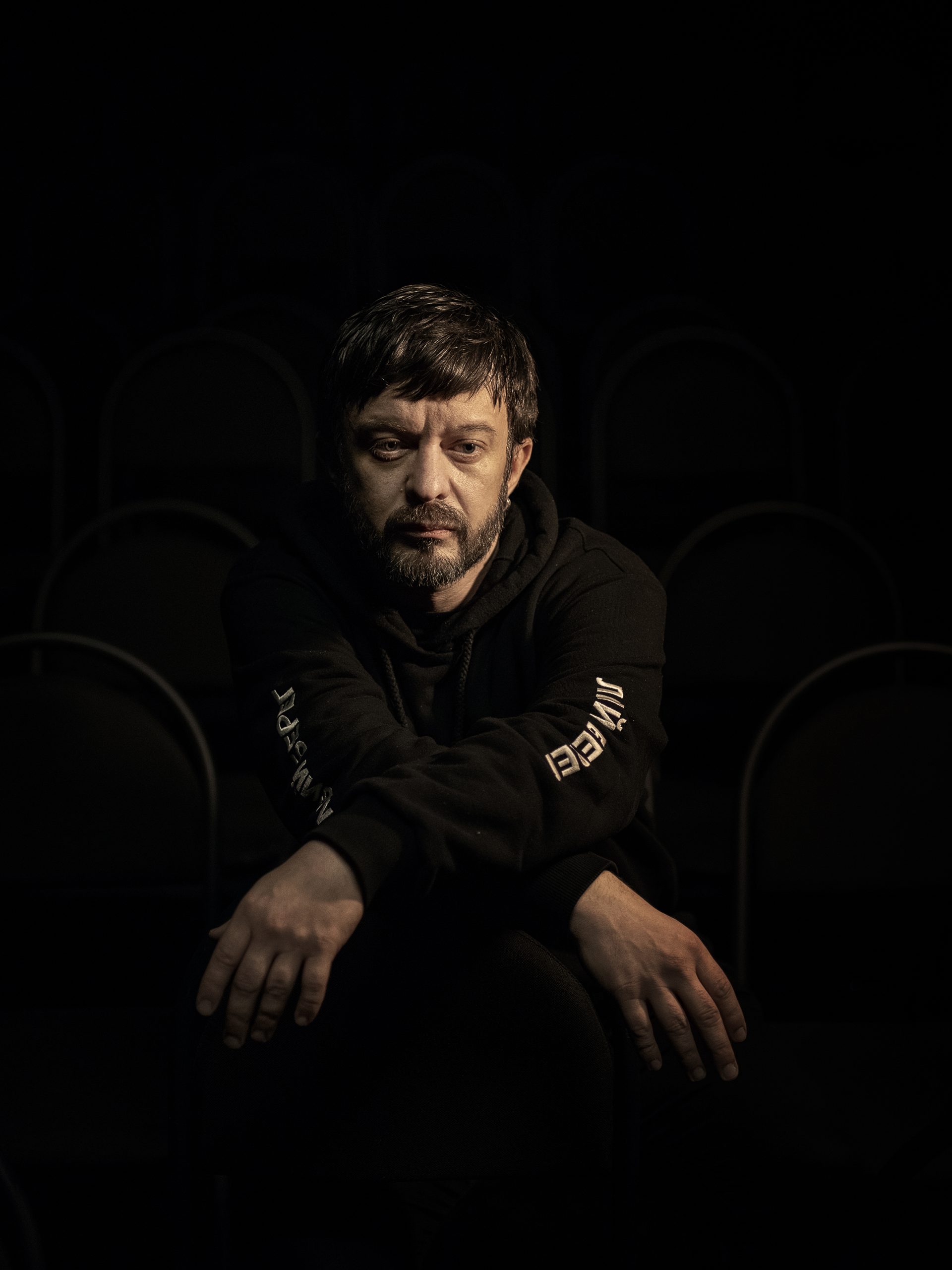 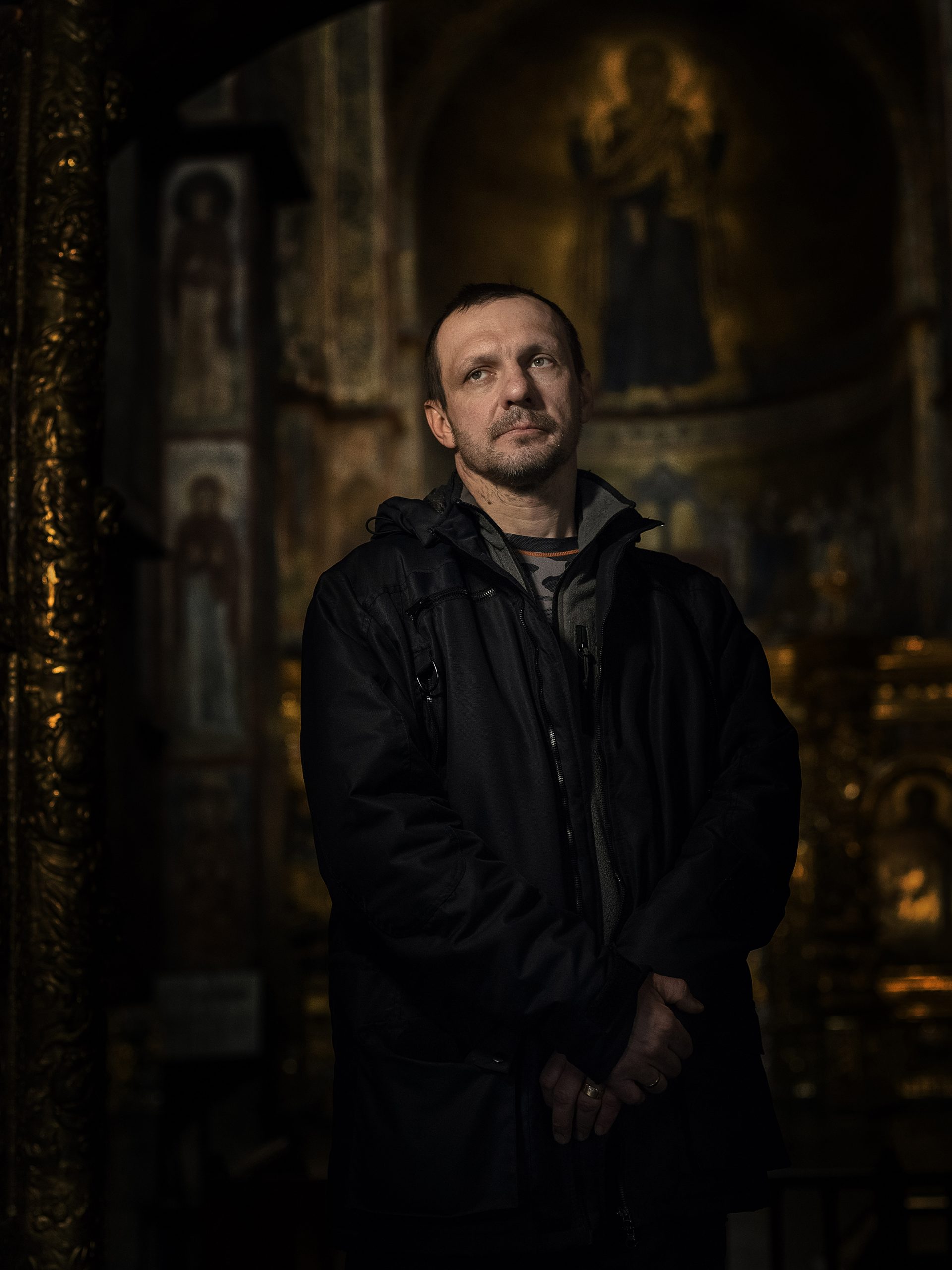 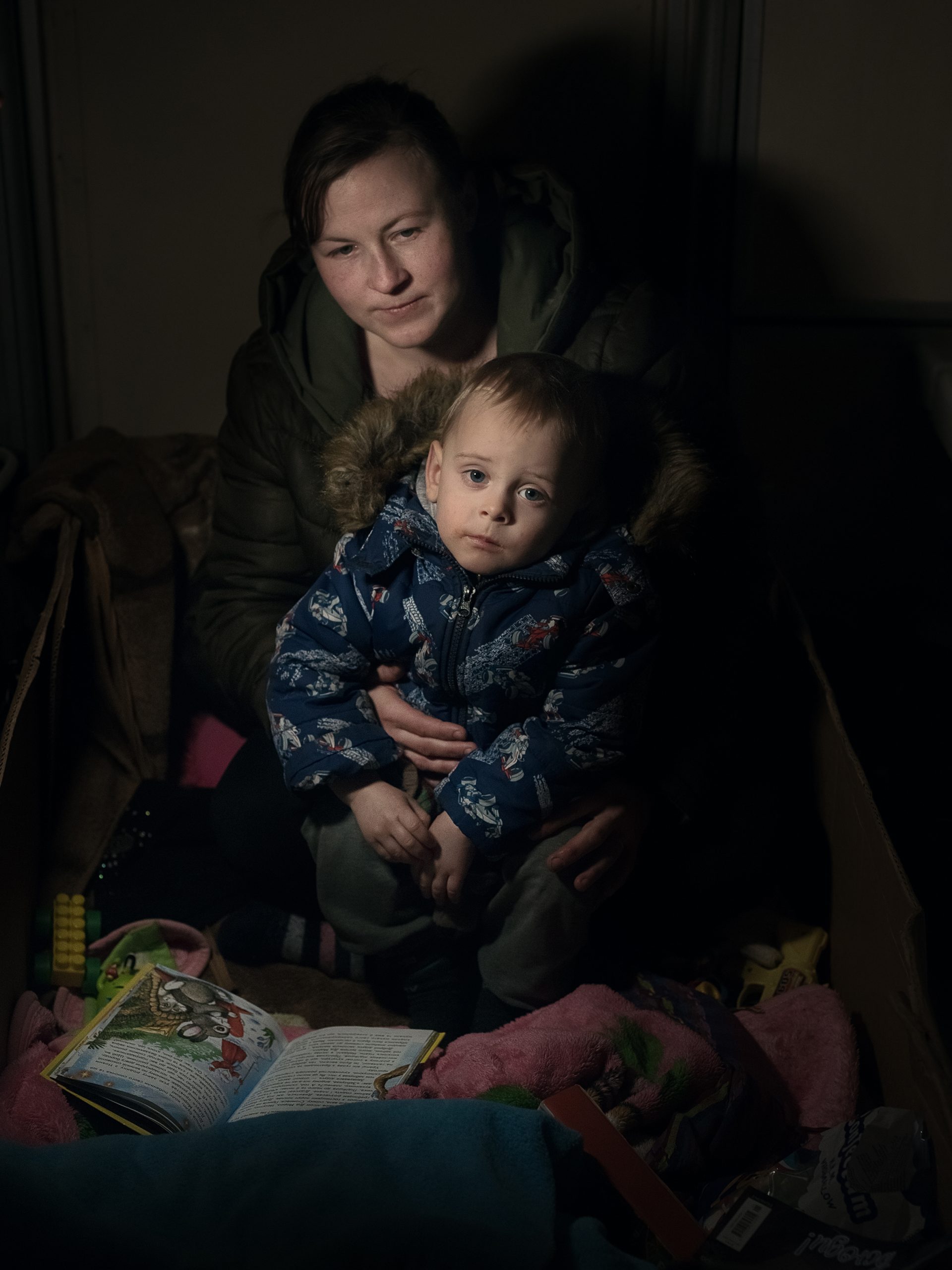 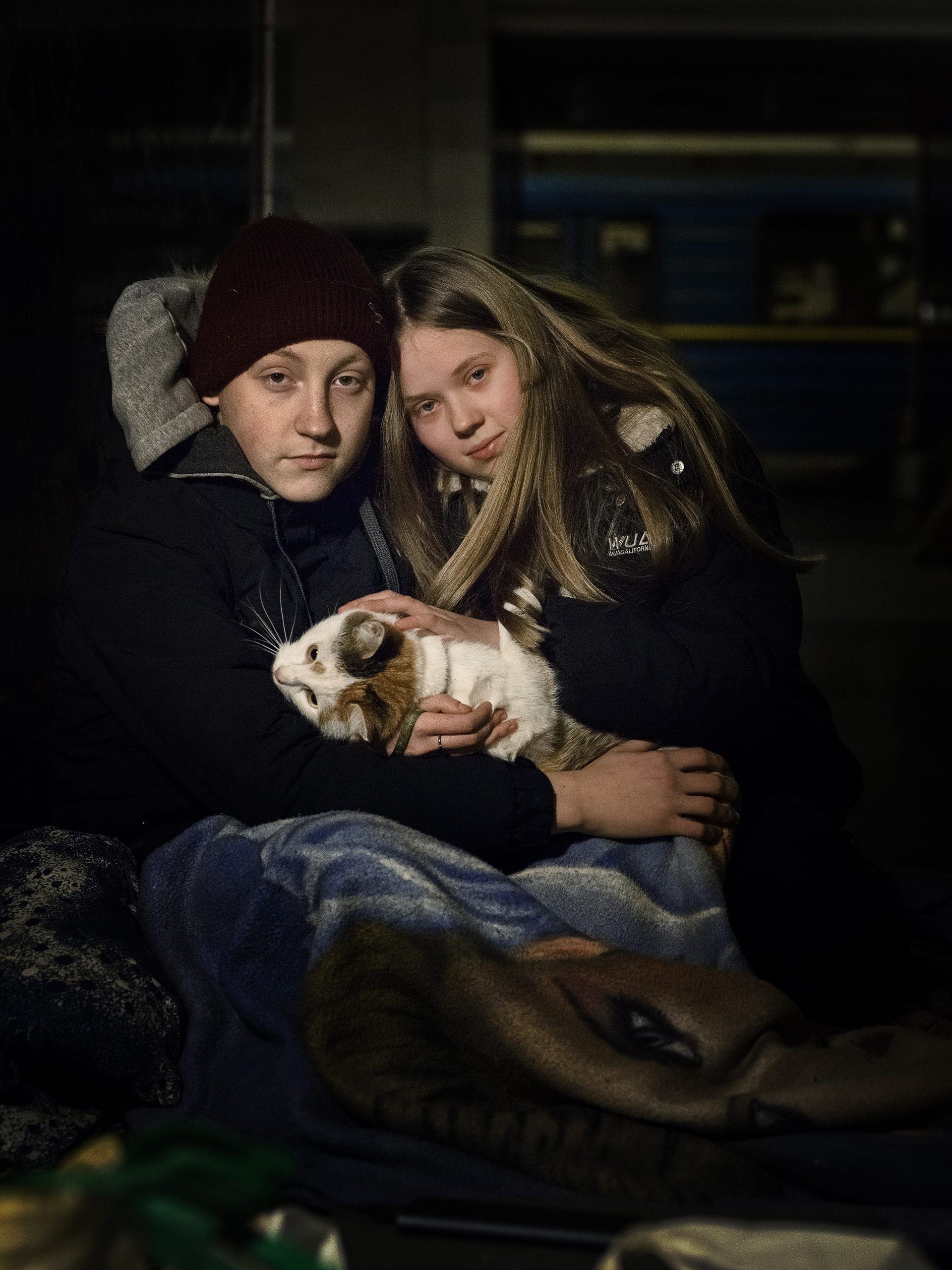 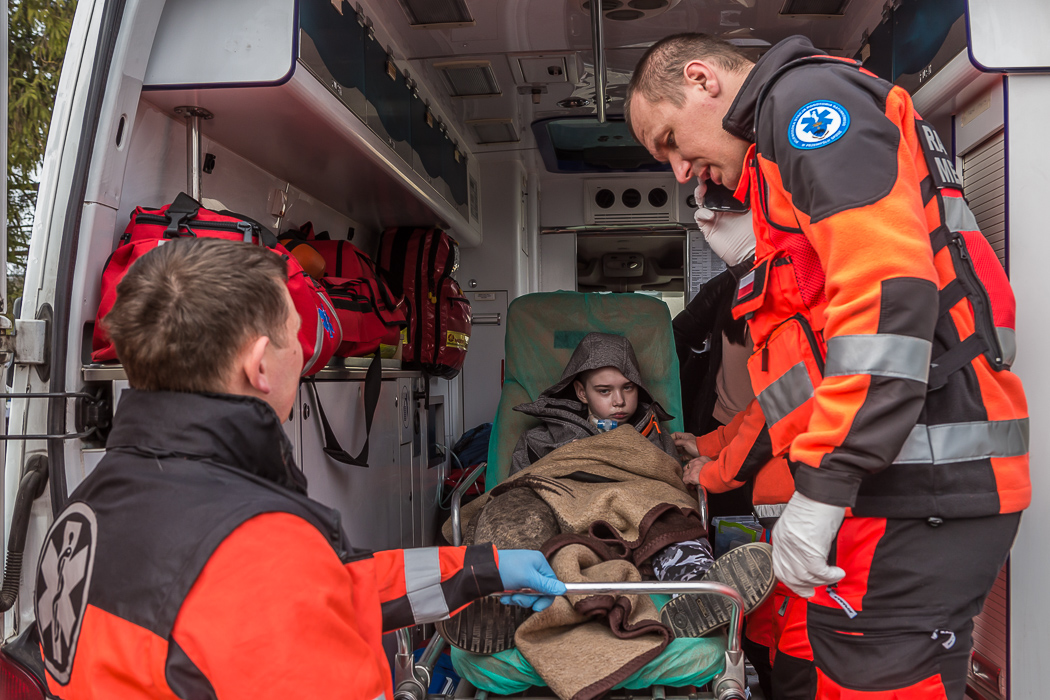 Tymofii Shapoval, 10, a Ukrainian patient who has brain tumour, waits in the ambulance while medics plan his evacuation from the Medyka border crossing via helicopter in Medyka, Poland on March 30, 2022. Russia invaded Ukraine in late February creating a humanitarian crisis in Ukraine, and shortly after St. Jude teamed up with foundations in Poland to evacuate children with cancer from the war zone. 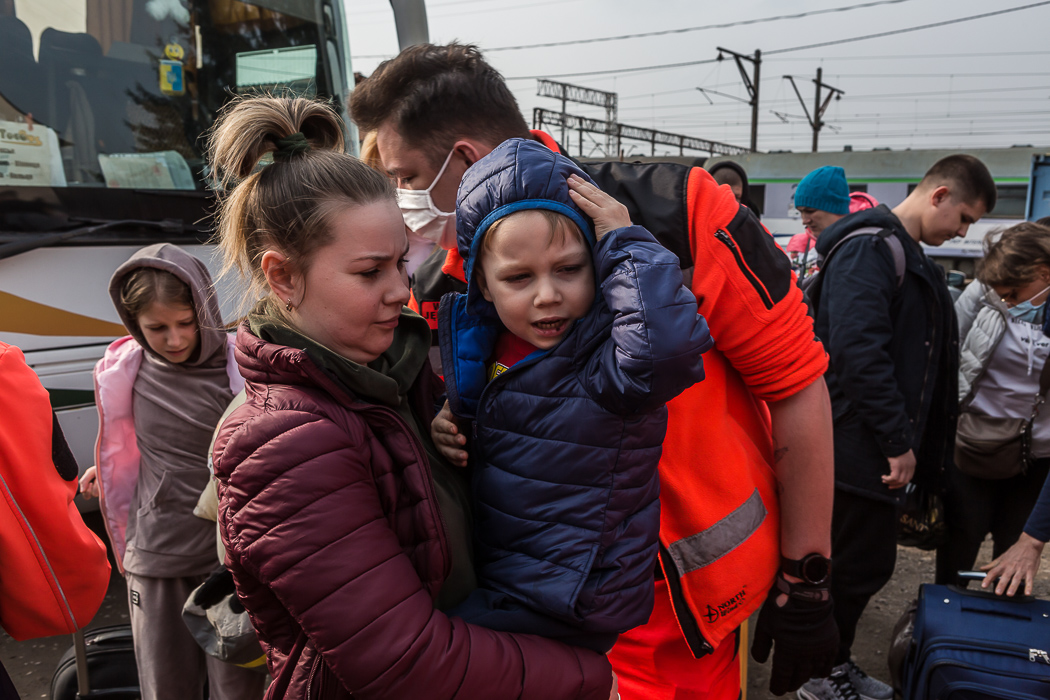 A group of oncologically ill Ukrainian children together with their family members disembark the bus that took them across the border from Lviv, Ukraine to Poland at the Medyka train station in Medyka, Poland on March 30, 2022. From Medyka these children, who went through arduous journey from different cities in Ukraine (like Kherson, Sumy, Kyiv, Mykolaiv and others), departed to the hotel turned into Unicorn Marian Wilemski Clinic outside Kielce from where they were be sent to different hospitals across the world for treatment. 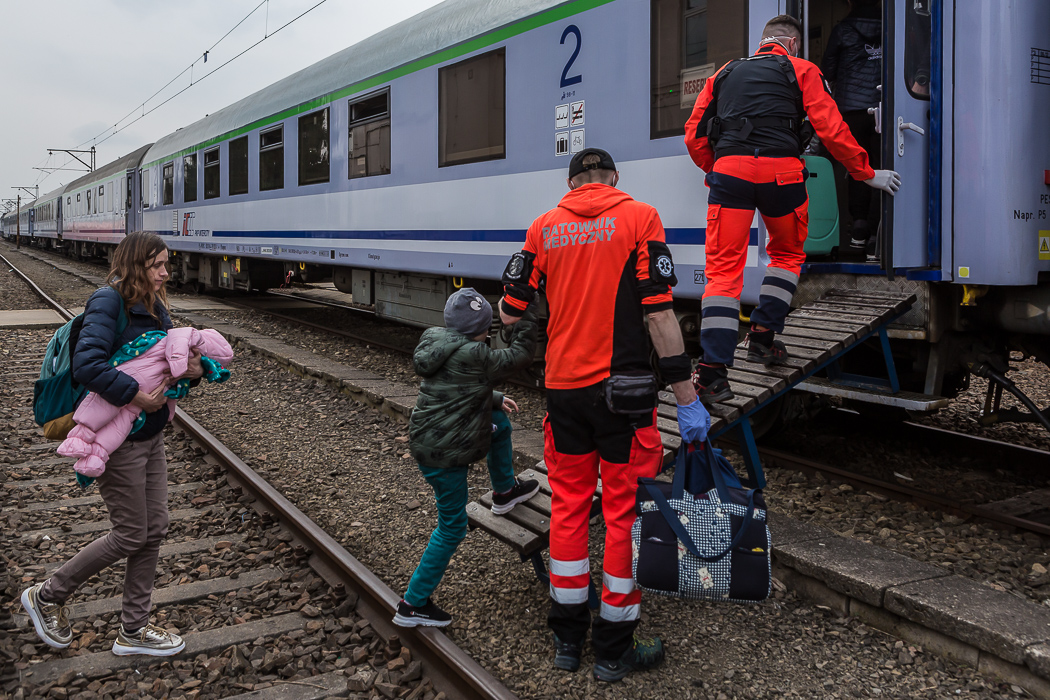 A Ukrainian family with oncologically ill children, after just crossing the border, gets on a medical train at the Medyka train station in Medyka, Poland on March 30, 2022. It took them almost 4 hours to cross the border due to bureaucracy and they traveled from Lviv in two buses and eight ambulances followed by a police escort. 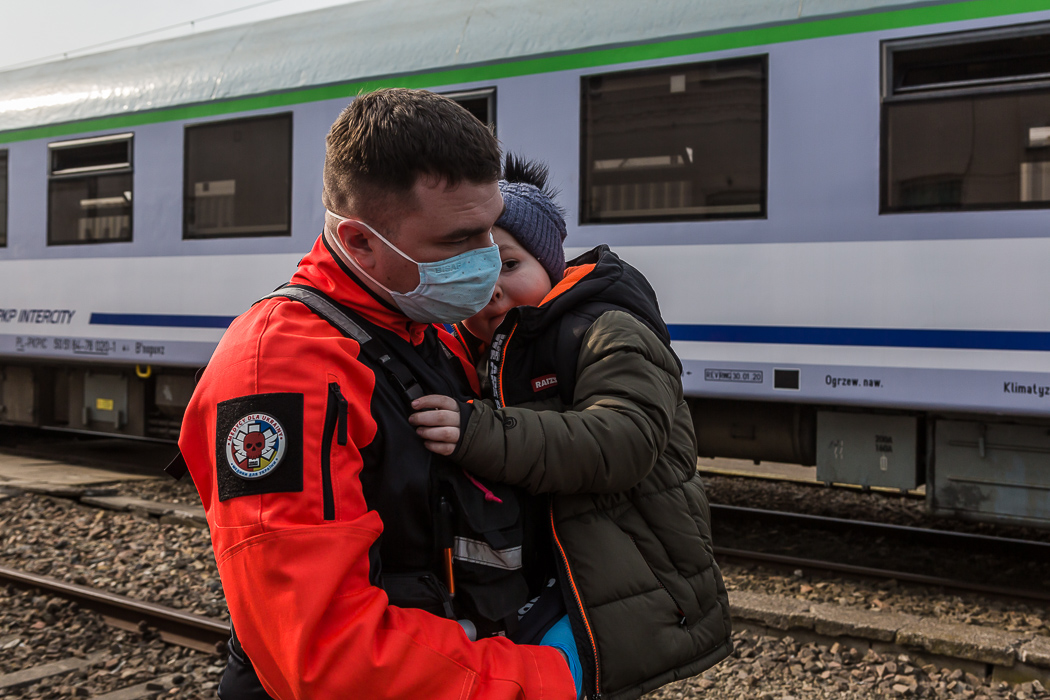 A Polish medic carries a Ukrainian boy with cancer, who after just crossing the border with his family members, will get on a medical train at the Medyka train station in Medyka, Poland on March 30, 2022. 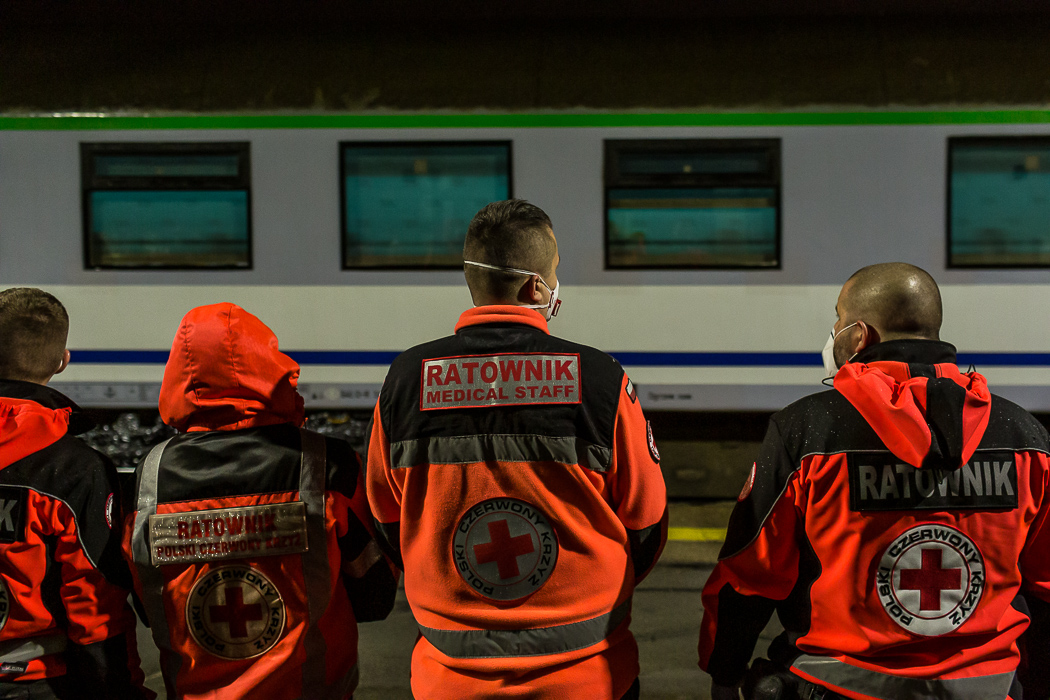 Polish Red Cross medics wait at the Kielce train station to meet a medical train bringing a group of oncologically ill Ukrainian children from Medyka border crossing, where they got to from Lviv, Ukraine, in Kielce, Poland on March 30, 2022. 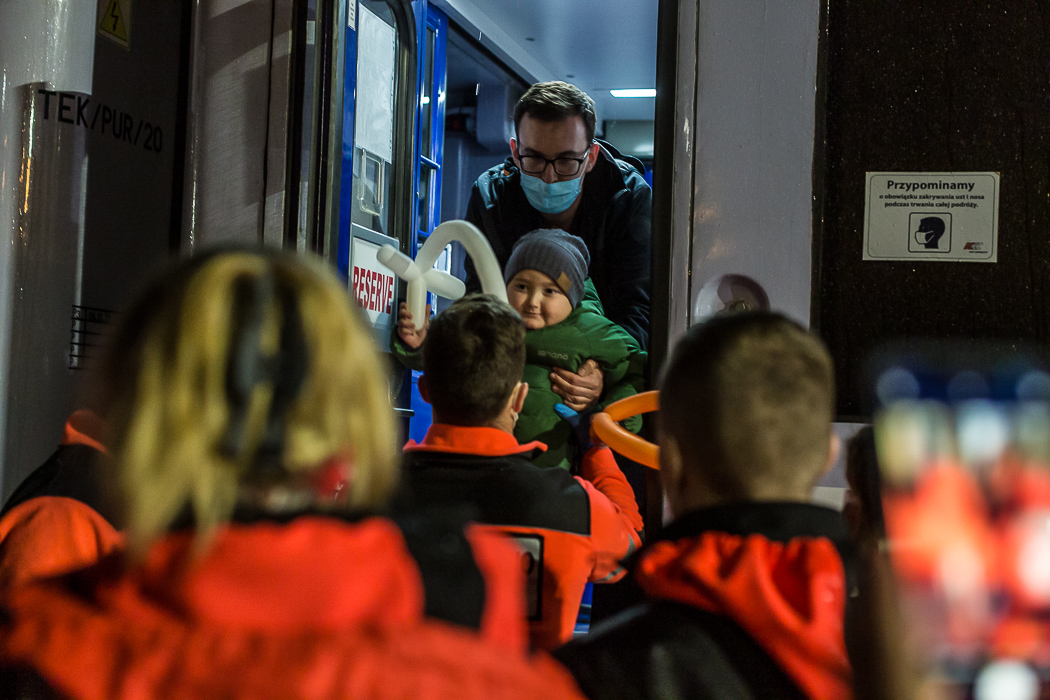 Polish Red Cross medics and other volunteer groups meet a group of oncologically ill Ukrainian children arriving from Medyka border crossing, where they got to from Lviv, Ukraine, at the Kielce train station in Kielce, Poland on March 30, 2022. 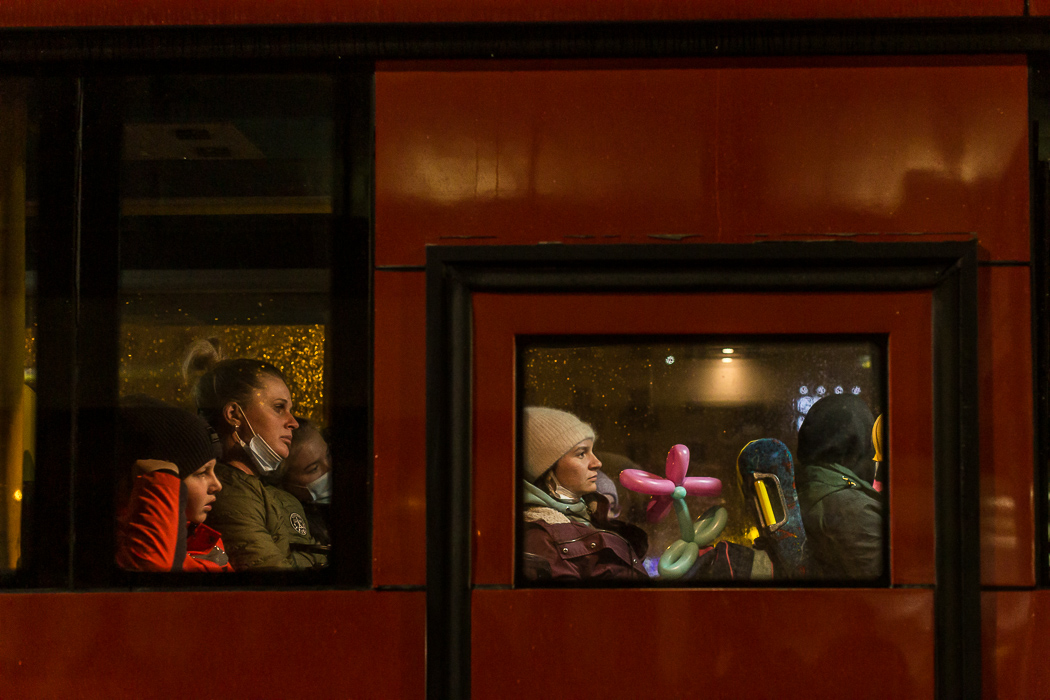 A group of oncologically ill Ukrainian children with their family members, with Oksana Besidovska, 31, in the middle, sit on the bus, after arriving from Medyka border crossing on a medical train, at the Kielce train station in Kielce, Poland on March 30, 2022. 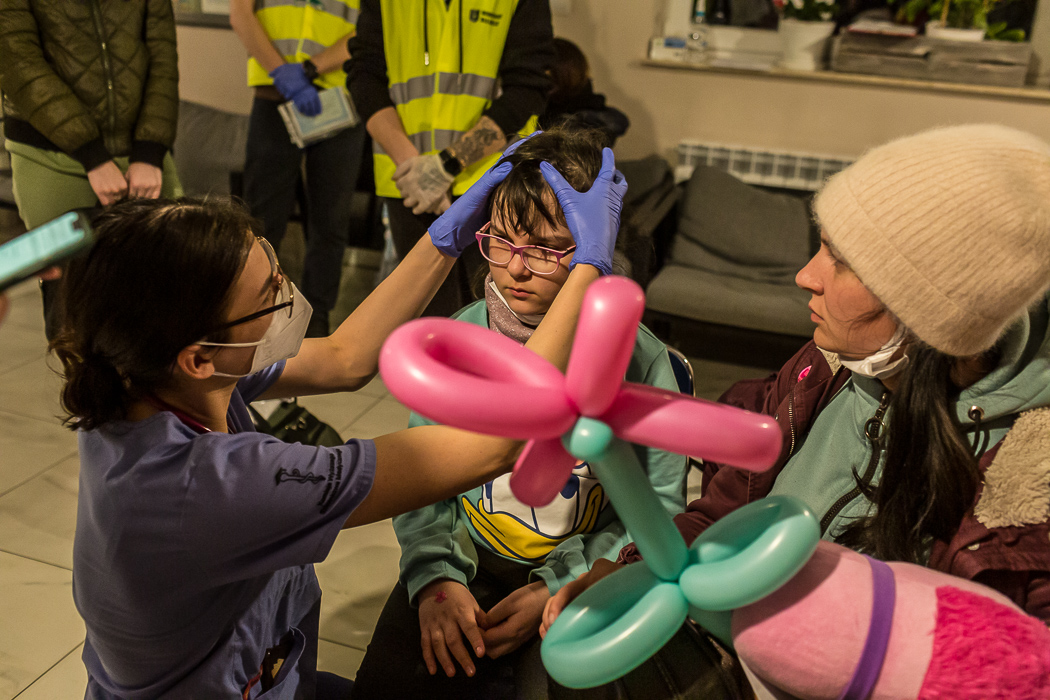 Yevheniia Besidovska, 9, together with her mother Oksana Besidovska, 31, go through the interview triage process and the vital signs checkup with doctors at the hotel turned into Unicorn Marian Wilemski Clinic in Bocheniec, around 20 km outside of Kielce, Poland on March 31, 2022. Oksana Besidovska, and her daughter are from Sumy and had to flee the war. Yevheniia  has a brain tumor that has returned. When the full-scale war started, they had to hide in the basement of Oksana’s parents’ village house. The Unicorn Clinic is set up as a temporary stopping place, where the clinic team gathers all the medical information for each group of arriving refugee families and sorts through a list of facilities able to take patients for treatment. 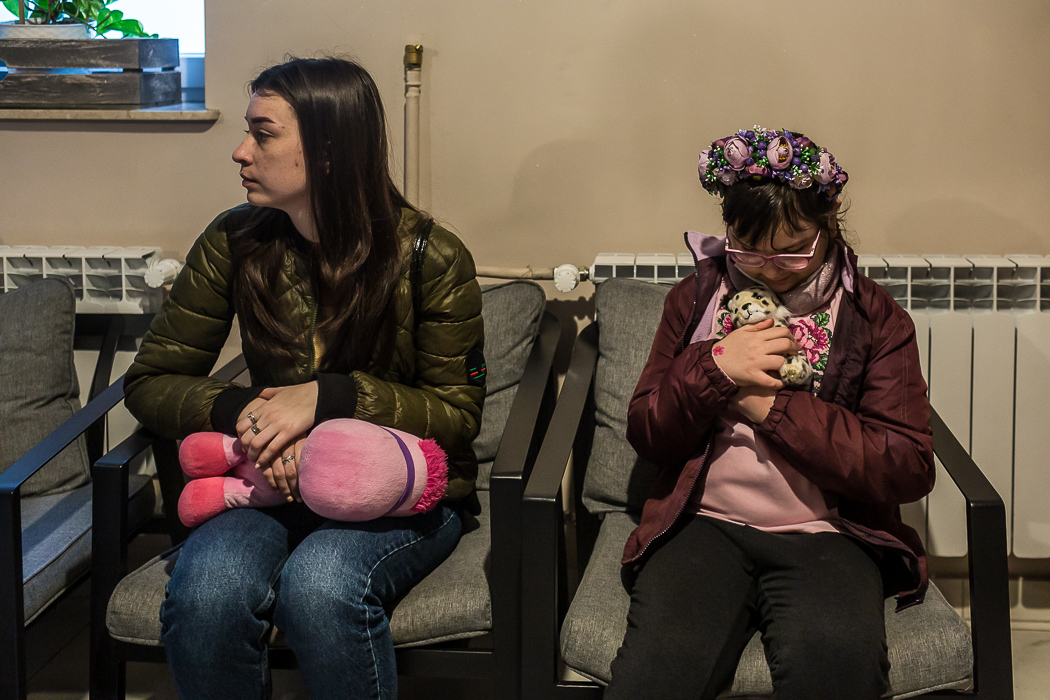 Yevheniia  Besidovska, 9, who was diagnosed with a brain tumour, sits with her aunt Maryna at the hotel turned into Unicorn Marian Wilemski Clinic, waiting for the bus taking them to Warsaw Airport from where they will depart to Rome for treatment in Bocheniec, around 20 km outside of Kielce, Poland on March 31, 2022. Yevheniia  and her mother Oksana (as well as Oksana’s sister Maryna) were taken to the hospital in Rome on the presidential plane from Warsaw, and they were met by the Pope himself in Rome. 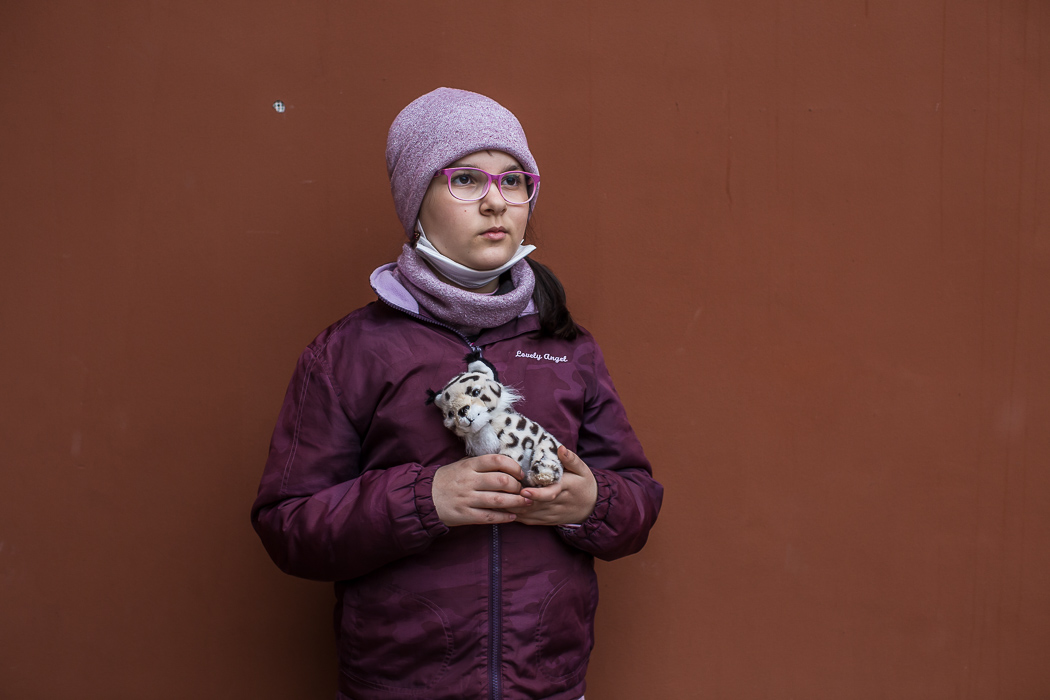 Yevheniia  Besidovska, 9, who was diagnosed with a brain tumour, poses for a portrait with her favorite stuffed animal at the hotel turned into Unicorn Marian Wilemski Clinic, waiting for the bus taking them to Warsaw Airport from where they will depart to Rome for treatment in Bocheniec, around 20 km outside of Kielce, Poland on March 31, 2022. They are part of a group of oncologically ill children and their families, who arrived all the way from Lviv, Ukraine a day before, switching from buses and ambulances to a medical train at the Medyka border crossing, and who spent a night in this clinic before they will be sent to different hospitals across the world for treatment. Yevheniia  and her mother Oksana (as well as Oksana’s sister Maryna) were taken to the hospital in Rome on the presidential plane from Warsaw, and they were met by the Pope himself in Rome.